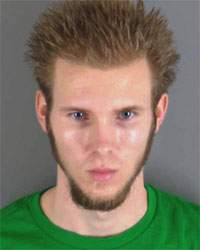 What a creepy individual. The picture he sent our contributor was that of a happy looking well-adjusted person. When he showed up, he looked more like something out of a Rob Zombie horror flick. The type of picture that would make a little female think "Oh, cute college guy", a total fraud.

Pallesen, 19, has received a year in jail, five years probation and registration on California's sex offender list. We're quite pleased.

Notes from the Contributor, Wendy
On January 4, 2006, it took a mere six minutes for Erik Pallesen (aka jazzeman04) to broach the subject of meeting me, and only five more minutes to make the meeting a sexual one. Pallesen moved incredibly fast, gunning straight towards sexual talk with what he believed was a girl of only 12. A 19 year-old college student, who sent a rather clean-cut and respectable looking photograph of himself at the time, Pallesen revealed a very twisted, sexually depraved side of himself, the likes of which many probably wouldn't believe if one simply told them. You'd truly have to read to believe.

Aside from his desire for a sexual relationship with my 12 year-old persona, he also asked if I had a friend who would want to join in with us - a school friend, very likely one my exact age. Porn movies were an additional feature to his planned night of child molestation. At no time did the mention of my age seem to deter him from even the smallest or most graphic details of his desires; it just didn't seem to matter to him at all. In fact, he even asked point blank if this "was a joke", and if I was as serious as he was. It was obvious to me that he wanted this not as merely fantasy, but as reality, and his arrival at our Dateline house in Riverside was the most tangible proof of that possible.

Many thanks to the Riverside Sheriff's department, Det. Sheldon and Lt. Bianco, and district attorney Michelle Paradise, for working so closely with Perverted-Justice and taking a hard pro-active stance on putting guys like jazzeman04 away even early in their adulthood, before they have a chance to leave a trail of victims in their careless wake.

This is our 68th conviction since June of 2004 and our 28th conviction for the year 2006 thus far. This is YET another California conviction, this one from our Dateline III sting operation in Riverside that netted a total of 51 arrests over three days. Pallesen is yet another in what will be a very long line of convictions stemming from that sting operation. Thanks to Dateline, Riverside and everyone else involved in putting that record-breaking operation together.
Conviction Counter
Number of predators convicted due to
Perverted-Justice.com since June 2004: