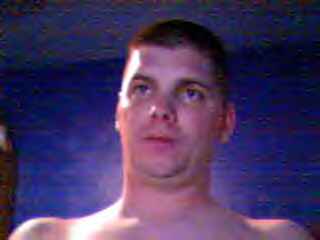 From there, the Hanna's did everything within their power to try to harass our volunteer in order to attempt to help his case. Becki Hendrickson, Ken Hanna's mother, is a woman of extraordinary stupidity and insanity. Like previous mothers such as Linda Hogan of New York, she believed that her little precious boy couldn't do any wrong. Still living with her while in the military, Hanna was actually using her premises to look at child porn and solicit what he thought was an extremely underage child. Becki and Ken attempted to intimidate our witness by threatening her with her personal identity... however, we make sure our volunteers are double-tough, able to see any case through.

Notes from the Contributor, Lucky
Ken Hanna serving time is justice at it's best. My first chat with him was 10/04/04. The road from then until 1/27/06 was very long and twisted. Ken WAS an IT guy for the Navy, he thought he could cover his tracks and avoid serving any time. He thought losing weight and dying his hair would make him unrecognizable to me. He thought revealing my identity would scare me off. What he did not realize was that he was up against the wonderful team known as Perverted Justice. Thanks to everyone who helped with Ken Hanna, and to every forum member who helps in so many ways to clean up the internet for children.

Hanna was charged with the child pornography charges found after military investigators searched his home due to our chat with him. Additional charges may be forthcoming now that Hanna has been sentenced to a year in the brig for downloading pedophiliac content.

This is Lucky's third conviction, our fourth conviction this month (January 2006) and our fourth conviction in Virginia. This marks our forty-fourth conviction since our first in June of 2004. We'd like to thank the wonderful military investigators who were able to find the disgusting content on Hanna's computer as well as the military prosecutor that has been tenacious in dealing with the warped duo of Hendrickson and her son Hanna.
Conviction Counter
Number of predators convicted due to
Perverted-Justice.com since June 2004: